It's a Christmas present from my daughter. Easy assembly and a pleasure to drive. It came with a broken battery handle but it's ok.

Hello Hans, Thank you so much for your great review! We are so happy to hear that the product is working out so good for your daughter. Please contact us to our direct line
1-800-487-3808 so we can further assists with the battery ! Thank you for being a Vive Health Customer-Carolina- Vive Health CS

This company and product is very good, only one concern: no guard around the movement levers (?) and I accidentally set the machine in movement all the time. I do try and remember to pull the key out whenever I stop. It’s, light, fast and the tires are the best? Thank you….

Hello Ron!, Thank you so much for your glowing feedback. We are so glad to hear that our products are doing you so well. Please feel free to contact us if you need any further assistance at 1-800-487-3808. Thanks for being a Vive Health Customer. -Angie- Vive Health

After being scammed on Facebook 5 times with cheap deals. I found this company we love it excellent on time delivery date and the freedom to travel independently for Manang. 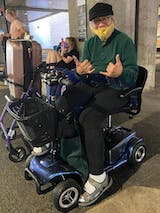 Hello Reyna!, Thank you so much for your glowing feedback. We are so glad to hear that our products are doing you so well. Please feel free to contact us if you need any further assistance at 1-800-487-3808. Thanks for being a Vive Health Customer. -Angie- Vive Health

Without it I was not mobile at all. I can not walk for long distances and I was stuck home for years until this thing gave me my life back! I bought this second scooter for my tired wife who by the time is done with both our chores has no energy. This one is for her so she can go with me. These scooters have given me my life back. We both scoot on down the road!!!!!

Hello Alex!, Thank you so much for your glowing feedback. We are so glad to hear that our 4 Wheel Scooter are doing you so well. Please feel free to contact us if you need any further assistance at 1-800-487-3808. Thanks for being a Vive Health Customer. -Angie- Vive Health

J
James W. (San Diego, US)
Wonderful. Thinking of buying another one.....

I had paralytic poliomyelitis as a kid, and all of my life I've had to wear braces on both legs. Up till recently, I walked around places like Disneyland, and zoos, etc., but now I have four grandkids who like to race around everywhere, and I can't keep up. So, I decided that it was time to buy an electric scooter. I tried a 3-wheel, but it was too unstable, especially when travelling "sideways", across an incline. For example, where I live, the entire sidewalk slopes at every driveway, and I was constantly worried about tipping over to the side when I rode across those sloping parts of the sidewalk.

So, I looked carefully at various 4 wheel models. I wanted one that could fit in the back of our car (Volvo XC60), and that my wife & I could load & unload. Some were large and powerful (stable, and could deal with fairly steep hills), but were correspondingly too heavy. Some were made for traveling (including flying), but looked too flimsy (possibly unstable). I settled on this one, from Vive Health. I'm delighted.

Easy to load into car: 1. First, remove the battery. It is moderately heavy, and I can't easily keep my balance when lifting with two hands, but the battery has a solid handle, allowing me to load it into the car myself, using one hand (leaning on the car with the other hand, to help me balance). 2. Then, lift the seat off its spindle (it's quite light), put in car. 3. Unscrew the cable that connects the rear wheels / motor to the front part of the unit. 4. Pull up a "ring" to disconnect the rear wheels / motor from the front part of the unit. 5. Fold down the steering column on the front part of the unit, and put that into the car. It's quite light, but I have to have help with this, because it needs two hands to lift it. My (able bodied) wife & I can do it easily. She holds the grab-bar at the front, and at the back there is a plastic handle that I hold, with one hand. 6. Finally, lift the rear wheels / motor into the car. This is the heaviest part, but I can do it myself by gripping (one-handed) the spindle that holds the seat.

Easy to "rebuild" when you arrive at your destination. Take everything out of the car (I can do most of that myself, though my wife helps with the front part of the unit). Then, basically, you simply reverse what you do when getting it ready to load into the car. Take about 2 minutes from opening the car's rear liftgate, to being ready to go.

Although it's quite small, it's far more stable than the 3 wheel scooter that I tried. I can cross the sloping parts of the sidewalk without freaking out. I have used it, several times, at the San Diego Wild Animal Park. It has quite a few mild inclines, all of which this scooter traverses easily. On a horizontal surface, it goes faster that most people would want to walk, so now I can keep up with the family (my beloved wife sometimes orders me to slow down :-) ). After 3 trips there, the battery still has plenty of charge left.

Limitations? Yes, but none of them are a surprise. It won't easily travel on soft surfaces (grass, soft dirt). It won't handle steep hills. It's quite small so (as others have posted) it may be a bit awkward for tall people.

Bottom line: 5 stars. We are lucky enough to own a second home in a different city, and I'm thinking about buying a second unit for when we're there.

Hello James, Thank you so much for your wonderful review! We are so happy to hear that the scooter is working out so well for you! Thank you for being a Vive Health Customer-Alice- Vive Health CS

How heavy is the Vive scooter?

The Vive mobility scooter weighs 88.2 pounds. The heaviest piece when disassembled for transportation is 29 pounds.

Can the Vive scooter make it over a 2” doorstep?

The Vive scooter has a ground clearance of 1.57” and will not be able to clear 2” doorsteps.

What type of battery does the scooter use?

Does this scooter beep when backing up?

No, the Vive scooter does not beep when in operating in reverse.

Will I be able to take the battery off of the scooter for charging?

Yes, the battery pack is removable for convenient off-board charging.

How does the scooter handle hills?

The Vive scooter is designed to safely handle inclines of 6 degrees or less.

Is the battery and charger included?

What is the weight limit for the Vive scooter?

The Vive scooter safely supports up to 265 pounds.

Does the scooter have a reverse for backing up?

Yes! The Vive scooter can be driven in reverse, perfect for backing out of elevators, hallways and similar areas.

Is the scooter easy to put together?

Yes! The Vive mobility scooter is easy to assemble: no tools required.

Are the tires solid?

Yes, the flat-free tires are solid and nonmarking for safely navigating indoor surfaces.

Does the scooter include a front basket?

Yes! The Vive scooter includes a front basket that can be removed if desired.

How high is the scooter seat?

Is the scooter TSA approved?

Yes, the scooter is TSA approved and safe for air travel.

We offer 100% Risk Free Purchases on Vive Health brand products. Our specially designed products come backed by an industry leading guarantee. Feel good about shopping because we completely removed the risk.  If you need to redeem your guarantee you will receive a fast and courteous replacement, refund or exchange.  Each product page will specify which the length of the product's guarantee.

Only products purchased through ViveHealth.com are automatically registered in our guarantee program.  Purchases through 3rd party channels are only guaranteed if registered within 30 days of purchase. For products purchased through an authorized reseller, the claim must go through the reseller as Vive Health is unable to confirm proof of purchase.

Products purchased used or through unauthorized resellers are not covered.

Each purchase can only receive one guarantee redemption.  We can not continually refund, replace or exchange your product.

The term “Lifetime” means the estimated lifetime of the product covered within the specific warranty.